Now I am what would be considered a Conservative Baptist. I believe that the Bible is true, that Jesus lived, died and rose again, I believe in the virgin birth and miracles and so on.Yet I’ve been carrying around a deep dark secret for years now and I think I am finally ready to talk about it.

I believe in an Old Earth. But more than just that I believe in dinosaurs, that died out some 65 million years ago.

As a child who loved dinosaurs I had no idea that in some Christian circles they represented such a controversy. Now that I am aware of this controversy I find myself entering into conversations about dinosaurs from time to time.

In case you are new to the whole issue surrounding creation, the bible, and dinosaurs, let me bring you up to speed. There really are two problems, first the more general problem of Old Earth verses Young Earth. The problem is that the earth (the whole universe really) according to the Young Earth theory is only supposed to be 6000-10000 years old, yet it appears not to be. Dinosaurs are part of that problem.

The second problem is that if we accept the normal story about dinosaurs, we have death before the Fall. Let me explain; Genesis can give the impression that humanities sin was the cause of death in the world. That understanding of what Genesis 2 and 3 teaches is admittedly challenged if we have not only death, but a massive extinction event well before humanity. It is this second problem I will be talking about.

Near as I can tell there are three typical ‘explanations’ given to explain the presence of dinosaur fossils.

First the dinosaur bones are said to be not really bones of anything that ever lived at all. In fact they were deposited in the ground by God, for the specific purpose to test the faith of humanity. The first time I heard this I almost fell off my chair. I truly think I have never heard something so poorly thought through in my whole life. They are trying to solve a small problem, death before humanity fall, by invoking a massive problem, God lying. I don’t care if you called it a test of faith or not, if God deposits false information in the ground he is lying, something the bible says he cannot do.

If God lied about this what else might he lie about? A lying God is far more problematic than a dead dinosaur.

The second explanation is a lot like the first. Just switch out God testing our faith and replace it with Satan tempting us. This explanation also leaves us with a far more serious problem, Satan has gained the power to create. This again cuts to our core understanding of God, only God is capable of creation. Is a dead dinosaur really worse than a godlike devil?

The last and by far the most popular explanation is that dinosaurs and people in fact co-existed. One of my major problems with this assertion is that it isn’t made by anyone other than creation scientists. No one of another ideological persuasion has come to this same conclusion. It is harder for me to believe that everyone else is biased and refuses to see the truth, than it is for me to believe creation scientists are biased and refuse to see the truth.

When it comes down to it, I don’t think dinosaurs are either from our imagination nor that they want to be friends with you and me. And I think it fair easier to understand Genesis as saying humanity will be separated from God, spiritually dead so to speak, than that everything we know about the world is wrong. 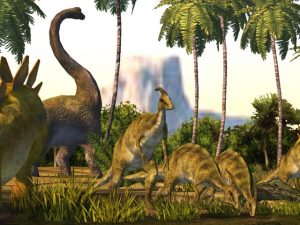