On Tuesday Meghan and Simeon went shoe shopping. They came home empty handed but Simeon knew what shoes he liked the most. They are a pair of kids Nike running shoes.They are light blue with a pink swoosh mark. They are girls shoes; 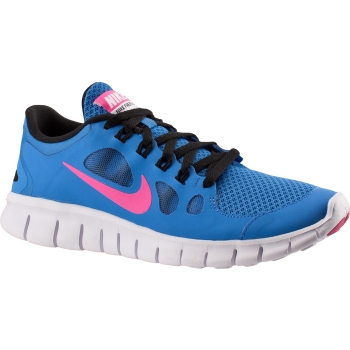 The Nike shoes my son wanted to buy

There were a few reasons why Meghan didn’t buy the shoes while they were out. The biggest reason was the shoes were out of stock. They also were $30 more than we wanted to spend and of course they are girls shoes.

I am trying to be a ‘modern man’ hence the name of the blog. But the idea of buying girls shoes for my son pushed past my limit. I don’t want to. In the end we didn’t. Partly because of the shoe, partly because of the lack of availability, but mostly because we were able to buy a pair of DC shoes for less. At least that is what I am telling myself.

I don’t think pink is a girls colour. I don’t worry that wearing shoes that are arbitrarily placed in the girls section will affect the person my son is developing into. I worry about bullies. My son is such a sweet boy. He is friendly and polite, and kind. I want him to stay that way for as long as he can.

I haven’t done a lot in my life that causes me to feel guilt. But the way I treated a classmate named Chris in elementary and junior high is one of them. Chris was a pudgy, socially awkward kid who never seemed to make friends. I was a gangly, scrawny hyper kid that had a few friends. By the time I made it to middle elementary I understood the way popularity worked. I understood I was not very high up the social ladder. But I understood that Chris was lower.

The sad thing is I think we could have been friends. I went over to his house once. We played with his very large collection of Ninja Turtles and Transformers. I had fun. When I got back home some of my small group of friends asked if I had gone out to play with Chris. I said ‘yes’. They informed me that he was ‘gross’ and ‘weird’ and that I shouldn’t have done that. I got the message. I could be their friend or his friend but not both.

The next day Chris came over to talk with me, his new friend. I pretended we hadn’t played together the day before. I told him I didn’t know what he was talking about. I am not sure if anyone has ever looked at me with such hurt and betrayal again as he did that day. I bet he went to bed the night before glad to have finally made a friend. Only to discover the next day he hadn’t. I felt bad, but I was scared. I was already teased some, and I didn’t want to be teased more.

Grade six was worse. Kids picked on Chris more and more. While I tried to keep my head down desperately hoping not to be next. One day in the spring after days of rain the playground turned into a mud pit. Chris came walking through the mud. I told him that it was a bad idea, that he would get stuck. But he didn’t listen. He walked into the middle of this mud puddle and instantly sunk to his shins. He was stuck.

What happened next is the moment in my life that I am now most ashamed of. Instead of running to get our teacher or lunch monitor for help I got some of my friends. We ran back to Chris and laughed. In no time at all everyone in grade 5-6 was standing around Chris pointing and laughing. He cried, and yelled, and begged for help. And we laughed. We laughed for so long we missed hearing the lunch bell ring. The staff finally came out to find out what was happening. Once they did they quickly sent us back to class and helped Chris get out of the mud.

I knew on that day what I did was wrong. But I did it anyway. I was scared. I was so scared that one day I would find myself being the person that everyone picked on, that everyone teased, that everyone laughed at. For years I told this story to people like I was a master story teller. It was my claim to fame. I was there first. We laughed at Chris again and again.

Chris disappeared part way through junior high. The rumour is he moved out West.I still don’t know if that is true. He never told anyone. Who would he have told? After he moved I was sure I would be next. I would be the butt of all jokes, of all cruelty, of all jockeying for popularity.

But then I changed. I met a girl that went to another school. I found when I wasn’t at my school I had a lot more confidence. People didn’t know I was a nerd. So I wasn’t when I was somewhere else. I was a charming, and somewhat good looking guy. That girl and I dated pretty much for two years. In that time I learned to see myself the way she saw me, not the way the people who picked on me saw me. By grade nine the ones who wanted to pick on me couldn’t anymore. Their words didn’t mean anything to me.

Is that a good reason not to buy my son light blue and pink sneakers? I don’t know. But here I am 18 years later and I am feeling that same fear for my kids that I felt for myself in grade six.

My boys, if only everyone would see you the way I do.

**Thank you for reading this post and all of your feedback. The story continued on a little after I posted this. You can hope over to Pink Shoes Continued to see the shoes Simeon picked in the end.**

13 thoughts on “Pink Shoes And Bullies”