I’ve never really liked birthdays. Nothing against them as an idea. In general I’m a big fan of cake, presents and being the centre of attention, but put those three together, and it just seems like a bad idea to me. So I’ve always dreaded my birthday rolling around. I figure it has something to do with the date … April 29th was always right in the middle of Music Festival in the town I grew up in and being a musical family, that inevitably meant there were going to be a million and one things happening on my Birthday. And as I got older my birthday always seemed to be just after final exams ended, or just some other crummy time of year. 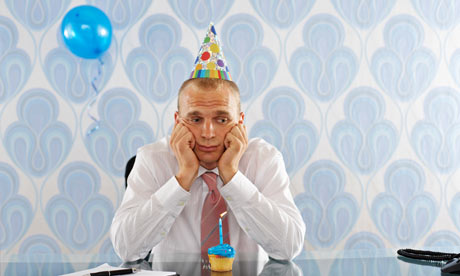 But it’s amazing how something that you dread so much can change the way you see the world. I remember turning 20, and even though in my head, I knew that in every sense, little to nothing was actually different that morning than it had been before I went to bed the night before, yet  everything seemed dynamically different. For the first time in my life I wasn’t a kid anymore. Immature, sure. But I was 20. Teenage was over.  I was an adult. Whether I took them seriously or not, my choices had consequences. I had to take care of myself. 20 is the last real milestone in life, the last time you stop being something and start being something new. Everything else is just getting older.

The church I am privileged to serve is going to be celebrating its 20th Birthday this coming April, and so we chose THRIVE as our goal through this 19th year of Ministry. But this is a scary time to be not only a young church, but to be young and in church. In his book I Refuse to Lead a Dying Church,  Paul Nixon points out that if trends continue the way they’re going, it’ll be somebody going into Ministry in their late twenties that turns off the lights in the last Church. Everywhere we look, every indicator we can find all tell the same story: the church is outnumbered, outflanked, and outgunned.

But that’s why I love this story of Elisha (you can read it in 2 Kings 6). He knew what it was like to be up against an army. So whether you’re part of a church facing an army of age, waning influence, and bills – or whether you’re simply feeling overwhelmed in your day to day life, I want to share with you three reflections that I think can help us all to Thrive.

What areas of life can you Thrive in?